by Pepe Escobar for Russia Today

Never in modern political history has it been so easy to “abolish the people” and simply erase 54 million votes cast in a free and fair presidential election.

Forget about hanging chads, as in Florida 2000. This is a day that will live in infamy all across the Global South – when what was one of its most dynamic democracies veered into a plutocratic regime, under a flimsy parliamentary/judicial veneer, with legal and constitutional guarantees now at the mercy of lowly comprador elites.

After the proverbial marathon, the Brazilian Senate voted 55-22 to put President Dilma Rousseff on trial for “crimes of responsibility” – related to alleged window dressing of the government’s budget.

This is the culmination of a drawn-out process that started even before Rousseff won re-election in late 2014 with over 54 million votes. I have described the bunch of perpetrators of what Brazilian creativity has termed ‘golpeachment’ (a mix of coup – “golpe” in Portuguese – and impeachment) as Hybrid War hyenas.

Sophisticated golpeachment – supported by what amounts to an Electoral Inquisition College – has propelled Hybrid War to whole new levels.

Hybrid War as applied to Brazil exhibited classic elements of a color revolution. Of course there was no need for no-fly zones or humanitarian imperialism to “protect human rights” – not to mention provoking a civil war. But considering the high resistance level of the victim state, where civil society is very dynamic, Hybrid War designers in this case bet on a mix of capitulation – and betrayal – of local elites, mixed with “peaceful protests” and a relentless mainstream media campaign. Call it ‘Civil War Light.’

That carried with it a fabulous cost-benefit ratio. Now the (immensely corrupt) Brazilian political system and the current executive/legislative/judiciary/mainstream media alignment can be used by the usual suspects for their geopolitical agenda.

Welcome to regime change light – politics, in a nutshell – as war by other means on the BRICS. A new software, a new operating system. Carrying a pathetic corollary; if the US is the Empire of Chaos, Brazil has now gloriously reached the status of Sub-Empire of Scoundrels.

Rousseff may be accused of serious economic mismanagement, and of being incapable of political articulation among the shark pool that is (immensely corrupt) Brazilian politics. But she is not corrupt. She made a serious mistake in fighting inflation, allowing interest rates to rise to an unsustainable level; so demand in Brazil dramatically dropped, and recession became the norm. She is the (convenient) scapegoat for Brazil’s recession.

She certainly may be blamed for not having a Plan B to fight the global recession. Brazil essentially works on two pillars; commodity exports and local companies relying on the teats of the state. Infrastructure in general is dismal – adding to what is described as the “Brazilian cost” of doing business. With the commodity slump, state funds dwindled and everything was paralyzed – credit, investment, consumption.

The pretext for Rousseff’s impeachment – allegedly transferring loans from public banks to the Treasury in order to disguise the size of Brazil’s fiscal deficit – is flimsy at best. Every administration in the West does it – and that includes Clinton’s, Bush’s and Obama’s.

The Operation Car Wash investigation, dragging on for two years now, was supposed to uncover corruption in the Brazilian political system – as in the collusion of oil giant Petrobras executives, Brazilian construction companies, and political campaign financing. Car Wash has nothing to do with the golpeachment drive. Yet these have been two parallel highways converging to one destination: the criminalization of the Workers’ Party, and the definitive – if possible – political assassination of Rousseff and her mentor, former President Lula.

When golpeachment reached the lower house of Congress – an appalling spectacle – Rousseff was eviscerated by Hybrid War hyenas of the BBC variety; “BBC,” in English, stands for “bullet,”“bible” and “cattle,” where “bullet” refers to the weapons and private security industry, “bible” to pastors and evangelical fanatics, and “cattle” to the powerful agribusiness lobby.

The “BBC” hyenas are members of almost all Brazilian political parties, paperboys for major corporations, and – last but not least – corruption stalwarts. They all benefited from millionaire political campaigning. The whole Car Wash investigation ultimately revolves around campaign financing, which in Brazil, unlike the US with its legalized lobbies, is a Tarantino-worthy Wild West.

The Brazilian Senate is not exactly an “upper” – as in more polished – house. Eighty percent of members are white men – in a country where miscegenation rules. A staggering 58 percent is under criminal investigation – linked to Car Wash. Sixty percent hail from political dynasties. And 13 percent – as alternates – were not elected at all. Among those favoring impeachment, 30 out of 49 are in trouble with the law. Charges include mostly money laundering, financial crimes and outright corruption. Renan Calheiros, the president of the Senate – who oversaw today’s impeachment vote – is the target of no fewer than nine separate money laundering/corruption Car Wash lines of investigation, plus another two criminal probes.

Rousseff is now suspended for a maximum 180 days while a Senate committee decides whether to impeach her for good. Enter President-in-Waiting Michel Temer – a dodgy, shady operator – who has been branded a “usurper” by Rousseff. And usurper this provincial Brutus certainly is – according to his own words. On March 30 last year, he was tweeting that, “Impeachment is unthinkable, it would create an institutional crisis. There is no judicial or political basis for it.”

His administration is born with the original sin of being illegal and massively unpopular; his approval rating floats between an epic 1 percent and 2 percent. He was already fined last week for violating campaign finance limits. And, predictably, he’s drowning in a corruption swamp – named in two Car Wash plea bargains and accused of being part of an illegal scheme of ethanol buying; he may become ineligible for the next eight years. Almost 60 percent of Brazilians also want him impeached – on the same charges leveled against Rousseff. 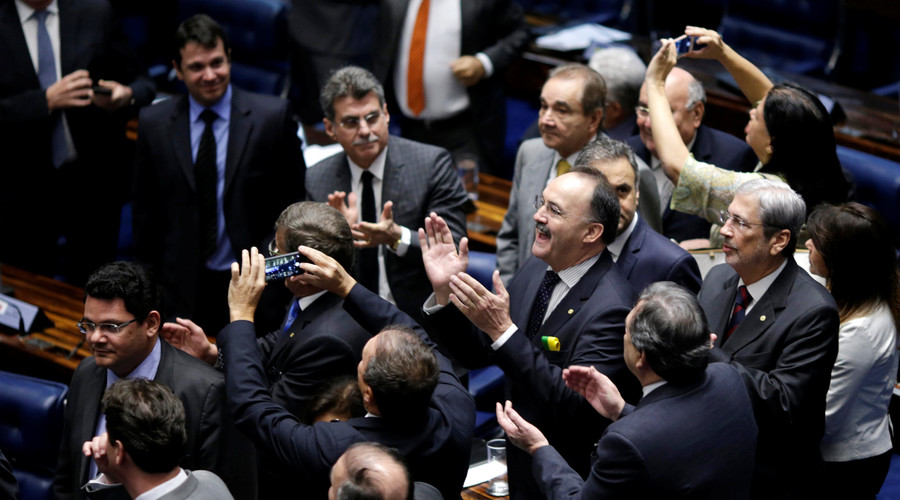 Brutus 1 (Temer) would not bask in the glow of his 15 minutes of fame without the shenanigans of Brutus 2 (Brazil’s number one crook, former speaker of the lower house Eduardo Cunha, facing charges of bribery and perjury, holder of illegal Swiss accounts, and now finally sidelined by the Supreme Court). It was Brutus 2 who fast-tracked impeachment as pure vengeance; the Workers’ Party did not cover his back as he was facing a tsunami of corruption charges. Brutus 2 used all his vast powers – he runs a campaign financing scam inside Congress – to obstruct the Car Wash investigation. His replacement, the interim speaker, is also under investigation for bribery.

So meet Temer, Cunha, Calheiros; these three amigos are the true stars of the Banana Republic of Scoundrels/Crooks.

As if the Supreme Court would be rascal-free. Judge Gilmar Mendes, for instance, is a lowly plutocrat vassal. When an attorney for the government entered a motion to suspend impeachment, he quipped, “Ah, they can go to heaven, to the Pope, or to hell.” Another pompous judge received a request to sideline Cunha as early as December 2015. He only examined the request over four months later, when the whole golpeachment scam was in its decisive phase. And still he argued, “there’s no proof Cunha contaminated the impeachment process.”

Finally, complementing the whole scam, we find Brazilian mainstream media, with the toxic Globo media empire – which lavishly profited from the 1964 military coup – at the forefront.

All hail the neoliberal restoration

Wall Street – as well as the City of London – could not hide its excitement with golpeachment, believing Brutus 1 Temer will be an economic upgrade. Arguably, he might dare to tweak Brazil’s Kafkaesque tax code and do something about the enormous hole in the pension system. But what that mythical entity – the “markets” – and myriad “investors” are salivating about is the prospect of fabulous rates of return in a reopened-for-speculation Brazil. The Brutus 1 game will be a neoliberal feast, actually a restoration, with no popular representation whatsoever.

The golpeachment gang gets really incensed when they are identified as coup plotters. Still, they could not give a damn about the OAS, Mercosur, Unasur – all of them condemned the coup – not to mention the Holy Grail: the BRICS. Under Brutus 1, the Foreign Ministry, to be led by a sore loser senator, is bound to sink Brazil’s key role in BRICS cooperation, to the benefit of Exceptionalistan.

All one needs to know is that neither Nobel Peace Prize-winner Barack “kill list” Obama nor Queen of Chaos Hillary “We came, we saw, he died” Clinton condemned the ongoing regime change light/golpeachment. That’s predictable, considering Exceptionalistan’s NSA spied on Petrobras and Dilma Rousseff personally – the genesis of what would develop as the Car Wash investigation.

White House spokesman Josh Earnest limited himself to the proverbial platitudes: “challenging moment”; “trust in Brazilian democratic institutions”; or even “mature democracy.” Yet he added, significantly, that Brazil is “under scrutiny.”

Of course, the current stage of a very sophisticated Hybrid War strategy has been accomplished. But there are countless cliffhangers ahead. The Car Wash investigation – currently in slow motion – will pick up speed as a rash of dodgy plea bargains is already in store to create the conditions to criminalize for good not only Dilma Rousseff but the key piece in the chessboard: Lula.

Game over? Not so fast. The anti-golpeachment front does have a strategy: to imprint especially in “deep Brazil,” the vast masses of the working poor, the notion of illegality; to rebuild Rousseff’s image as the victim of a profound injustice; to re-energize the progressive political front; to make sure the Brutus 1 government will fail; and to create the conditions for the man who will come in from the cold to win the 2018 presidential elections.

Brazilian House of Cards? Bets could be made this may even end up as Anaconda, with Lula immobilizing the Hybrid War hyenas in a cobra clutch.