The intelligence service of the Donetsk People’s Republic have released the following map and claim that this is the Ukrainian plan of attack against the LDNR:

The Colonel Cassad website has posted a summary of what this plan includes.
Here is a machine translation of this text:

The secret service intelligence of the People’s Militia of the DPR has obtained a plan for a Ukrainian offensive operation against Independent Republics, which we announced earlier.

This plan of the AFU offensive operation in the Donbas was developed by the Ukrainian General Staff and approved by the decision of the NSDC in early February this year.

In accordance with the plan of the General Staff, almost all combat-ready formations and military units are involved in the offensive operation of the Armed Forces of Ukraine in the Donbas. A strike group of Ukrainian troops has already been created for aggression.

Up to FIVE days are allocated for the operation.

According to the plan of the Ukrainian strategists, on the appointed D-Day, it is planned to destroy military and civilian objects on the territory of the DPR and LPR to a depth of 10-15 km by carrying out a massive fire attack by rocket and barrel artillery of the 26, 43 and 55 artillery brigades of the Armed Forces of Ukraine, by striking aircraft, helicopters and unmanned aerial vehicles.

The main targets for destruction are identified – command posts of the People’s Militia, civil administrations, critical infrastructure facilities of the Republics, energy and water supply, storage sites of heavy weapons defined by the Minsk Agreements.

The APU offensive is planned from three directions.

The direction of the main strike of the Ukrainian army is KRAMATORSK – DEBALTSEVE.

The strike is carried out by the forces of 30 mechanized, 17 tank and 95 airborne assault brigades of the Armed Forces of Ukraine with the support of 26 artillery brigade. The immediate task is to reach the ALCHEVSK –YENAKIYEVO border within THREE days. The further task of the grouping is to reach the border of the Russian Federation within TWO days.

With the fulfillment of the immediate task, 81 airmobile and 25 airborne brigades are planned to enter the battle for the development of the offensive.

In the Azov direction, the forces of 53 mechanized and 36 marine brigades, from the Shirokino – STAROGNATOVKA line, as well as the 501 separate Marine infantry battalion from the area of NOVOAZOVSK, with the support of the 55 artillery brigade, are planned to advance in the direction of Komsomolsk and within TWO days reach the ILOVAYSK–ULYANOVSK line, thereby fulfilling the immediate task. Further develop the offensive along the border of the Russian Federation in the direction of Krasny Luch.

The units of the 12th operational brigade of the National Guard of Ukraine will operate in the second echelon of the operational tactical group “South”.

The Aidar battalion, operating in the area of responsibility of the 53rd brigade, has the task of preventing desertion among Ukrainian soldiers.

In the Luhansk direction, it is planned to conduct limited offensive operations by the forces of 57 motorized infantry and 24 mechanized brigades, with the support of 131 separate reconnaissance units of the Armed Forces of Ukraine from the NOVOTOSHKOVSKOYE – POPASNAYA line in the direction of the locality of ALCHEVSK. Having blocked the Lugansk-DEBALTSEVE highway “M-30”, the operational-tactical grouping “North” should develop an offensive into the depth of the defense of the LPR in order to reach the locality of KRASNY LUCH and connect with the grouping “South”.

During the fighting, it is planned to encircle and block large settlements of DONETSK, LUGANSK, Gorlovka and ALCHEVSK.

The units of the “Right Sector” stationed in the areas of the localities of STANITSA-Luganskaya and HAPPINESS should carry out disturbing fire on the positions of the NM, support the raid and sabotage actions of the 79 brigade.

The enemy’s plans will be smashed against the defense of the defenders of the Republics. In the case of Ukrainian aggression, enemy losses will exceed the scale of failed operations in 2014-2015.

My personal commentary would be this:

This plan lacks any kind of originality, except maybe the goofy ideas of using airborne, air-assault and even amphibious forces in a location where the Russian side will have very robust A2/AA means and air supremacy.  The rest is simple: try to cut off the DNR from the LNR and the DNR from the Russian border.  Characteristically, the Ukies will throw in everything they have from the get go.  I don’t believe that anybody on the Ukronazi side seriously believes that this will work.  However, this will guarantee a major bloodbath and unless the LDNR forces are capable of slowing down the Ukie attack to the point where it becomes obviously futile, this will force Russia to intervene.  Considering that the Ukies do not seem to have planned for a defense in depth anywhere along the LOC and considering the relatively short LOC (about 200km) and compact nature of the Ukie concentration of forces, I would personally be very tempted to look into enveloping the entire Ukie force by a pincer movement of Russian forces from the northeast and from the south, especially if the LDNR forces succeed in “pinning down” the Ukie attack.

In the past wars we have seen tactical “cauldrons” – maybe this time we will see an operational one?

If successful, such an operational envelopment will basically disarm the bulk of the Ukie military.  And since they love the Nazis so much, they will have the consolation to know that their end will be a “mini version” of what happened to the Nazis in Stalingrad.

Furthermore, there used to be a US military concept called FOFA (follow on forces attack) which instead of focusing on the attacking forces (at that time, the Soviet military) would focus on destroying 2nd echelon forces to prevent them from developing the 1st echelon attack and to disrupt the supply lines.  Using such a FOFA would also create the conditions for an operational envelopment.

Also, I should mention that even if the Ukies did prepare some kind of defense in depth, which they really should have, then another option for the Russians would be to inject a tactical maneuver group (probably one specially configured and reinforced battalion tactical group) behind the Ukie attacking forces.  That will create chaos in the Ukie disposition and force Ukie commanders to allocate forces to deal with this threat.

Conclusion: my money is on the LDNR holding the line or, at least, slowing down the Ukie offensive which is entirely predicated on a rather rapid penetration of the LDNR along one major, two secondary and one minor axes of attack.  If the LDNR forces cannot hold the attack, then Russia will have to engage her CAS, artillery and missile attacks to assist the retreating LDNR forces.  As for the Black Sea Fleet, it can offer both fire support and the option of an amphibious landing.  Even the threat of an amphibious landing near Mariupol could paralyze the southernmost Ukronazi axis of attack.  Finally, unless the Ukie attack is a quickly achieved and stunning success (the probability of which is close to zero), the Ukie morale will collapse as soon as their soldiers realize that 1) the tempo of advance has been stalled and 2) Ukronazis soldiers are dying in huge numbers (way more than in the first Ukie wars against the Donbass).

On a different note, the glorious USA has inflicted a crushing defeat on the skating Snow Niggers from Mordor:

Oh sure, the Snow Niggers still got 3 out of 4 top positions, but at least the land of the free and the home of the brave made a 15 year old girl sob in disgust.

As the New York Post piously thanks God for this glorious victory, we can all appreciate the legendary sense of “Anglo fair play” and the “Olympic spirit”: maybe we don’t have what it takes to take on their military, but we can still defeat a Snow Nigger on ice, thank God for WADA and the IOC too!

And, in the meantime, here is a lesson in “democracy and freedom” by Trudeau’s goons: 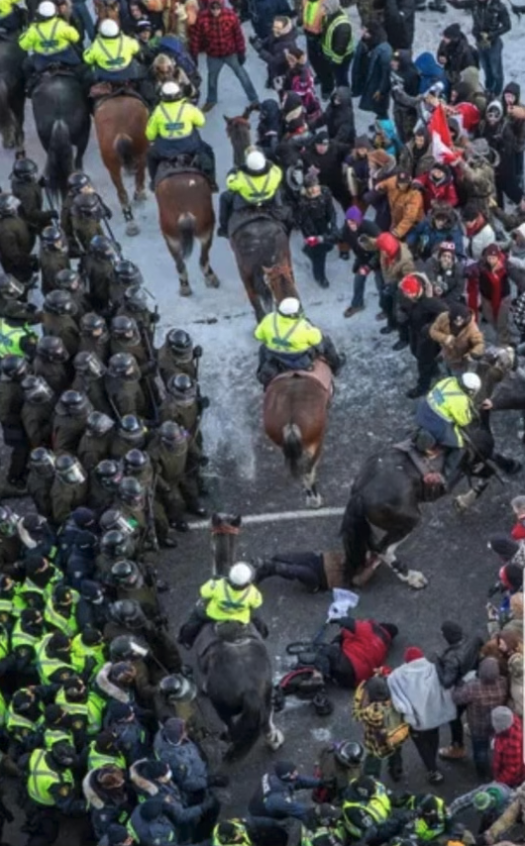