I am opening another open thread.  Please try to stick to FACTS and not just post opinions.

PLEASE DO NOT, REPEAT NOT, POST VARIOUS RUMORS COMING FROM WESTERN PSYOP OUTLETS, including the entire western corporate media and social media.  They now will spread all sorts of rumors and fakes and I don’t want them repeated here.

PS: here is a machine translation of a news update by Boris Rozhin:

1. The Russian Armed Forces are actively destroying airfields, ammunition depots, command posts and other key military infrastructure. The Ministry of Defense of the Russian Federation declares the defeat of all key airfields of the Ukrainian Air Force. It is also stated about the destruction of the remaining ships of the Navy.
2. At a number of sites, the Armed Forces of the Russian Federation crossed the border of Ukraine. According to the statement of the Ministry of Defense of the Russian Federation, the border guards of Ukraine do not provide resistance.
3. The armies of the DPR and LPR officially went on the offensive to liberate the territories of the DPR and LPR. The assault on Happiness has been announced.
4. CNN says that Lukashenka’s tanks have entered Belarus. Russian tanks are now 15-20 km from Kharkiv.
5. Martial law has been introduced in Ukraine. The destruction of the National Guard headquarters has been confirmed. The GO systems in Ukraine worked with great delay.
6. Information about the occupation of Mariupol and the landings near Odessa, which was distributed from both sides at the moment does not correspond to reality.
7. The Ministry of Defense of the Russian Federation denies the loss of the 1st aircraft, which Ukraine claimed.
8. The troops of the Armed Forces of the Russian Federation in the Crimea are moving to Perekop and Chongar. The work of artillery is noted. Attack helicopters are being observed over the Armenian.
9. The United States and NATO condemn Russia and threaten imminent sanctions, as well as support for Ukraine. They will not fight directly for Ukraine.
10. Rosaviation has closed 12 airports in the south of Russia. The ruble has significantly collapsed, as well as the hryvnia. Oil will soar up today.

1. The Armed Forces of the Russian Federation are successfully developing an offensive in the south, occupying part of the Kherson region, including Kakhovka, Genichesk and taking control of the North Crimean Canal. The landing party was thrown out at Kherson. Aksenov said that water will be supplied to the Crimea soon.
2. Putivl is taken in the north. The grouping of the Armed Forces of the Russian Federation is moving towards Kiev. More than 30 helicopters attacked Gostamel airfield (2 helicopters were lost), Ukraine confirms the advance of the Russian Armed Forces in the Kiev and Zhytomyr regions. Russian aviation is flying over Kiev. The SBU is burning documents.
3. Heavy fighting is taking place near Kharkov on the bypass road – there are losses in people and equipment on both sides. In the city, they are calling for hiding in bomb shelters. The metro has been stopped. Sbut An-25 APU. Volchansk and a bunch of different villages were taken.
4. In the LDPR, there is progress in a number of areas – several villages have been liberated, the Seversky Donets has been forced, an offensive is underway on Volnovakha. The APU has heavy losses. LDPR also has military and civilian casualties.
5. Reports about the landing in Odessa, the capture of Sumy and the situation in the Gostamel area have not yet been confirmed. After lunch, the second wave of airstrikes rolled. The center of the 72nd IPSO was destroyed, as well as the headquarters of the GUR MOU in Kiev.
6. The EU and NATO will impose various sanctions, but they will not fight for Ukraine. The Bosphorus will also not be closed. In general, it’s about like with Ashraf Ghani. It is worth noting that the Ukrainian Su-27 escaped to Romania. More than 500 Ukrainian border guards and military have already fled to Russia.
7. The AFU damaged two Russian vessels in the Sea of Azov. 1 sailor wounded. The vessels continued to move. The Kerch Bridge and the Kerch Strait continue to work. 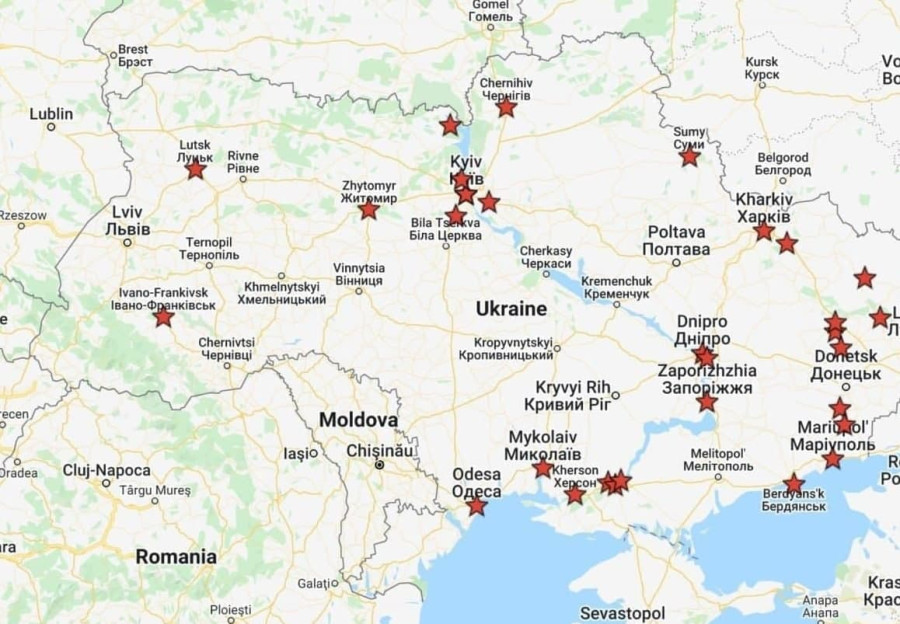