First, as always, a recap.

Turns out that the Iranian strikes were apparently very accurate, check out these photos: 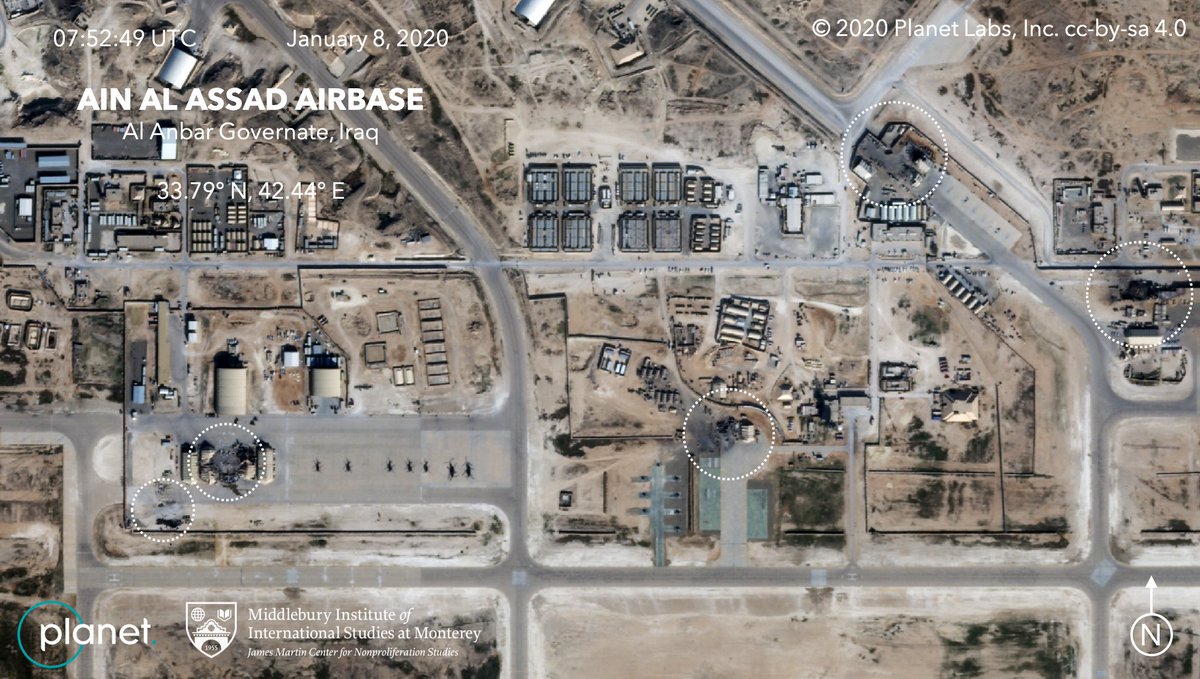 This is interesting, because while I had some US ex-Colonel on idiot-box saying that most Iranian missiles either missed or landed in the desert.  Rah! Rah! Rah!  The US has THE BEST military in the GALAXY!!  We kick these ragheads back to their medieval reality, bla-bla-bla.

The reality is that this has been a very effective “proof of concept demonstration”.  Think like this:  the Iranians have super-accurate coordinates for every single building in the Green Zone.  What impact would you think a determined – non symbolic – missile strike on key US buildings in the Green Zone would have?  How about US forces in Kuwait and/or Saudi Arabia.

Keep in mind that the kind of missiles Iran used is very much an older, less capable, generation.  For example, as far as I know, these missiles have no final guidance capability (you may want to double/triple check this one).  Other ones do (that I am sure of).

Furthermore, it is becoming apparent that Iran had no intention of hitting US personnel, at least not deliberately.  So when the Idiot-in-Chief tweets “so far, so good” he is quite correct, but for all the wrong reasons.

I think of this first strike as a very serious WARNING SHOT which serves two purposes.

First, to show that the “54 targets in Iran” threat is an empty one: Iranians don’t care (for certain) and Pentagon planners probably don’t want it either (most likely).  So besides hot air, the Idiot-in-Chief produced nothing.

Second, to show to those in the US who actually believe their own silly propaganda about the US having THE BEST military in the history of the Galaxy that in terms of missiles, Iran is doing just fine, thank you.

Now, in all fairness, I will ALWAYS welcome ANY gesture which can avoid a massive total war.  There is no doubt in my mind that these events are marking the beginning of the end for the Empire.  The only real question is at what costs to the rest of mankind?  So while he is a narcissistic idiot for sure, and while he wrapped the key part of his statement in all sorts of delusional and dumb chest-thumping and flag waving, I have to admit that Trump did the right thing once again.  Destroying 54 (or even a SINGLE one) Iranian target would have resulted in an Iranian strike on Israel (now we know for sure that it would be an accurate one too!) which would have triggered a massive regional war.  We STILL are not there and while many will call me naive or stupid, I am grateful for ANYTHING which can delay or cancel any major (or even minor) war.  And while I do think that Trump is a narcissistic idiot, I will ALWAYS recognize when he does something either right or even “less bad than what he could have done”.

I will also add this: I consider the US servicemen in Iraq (and the result of the world, for that matter) as guilty of voluntarily signing up to a military which has never and will never fight any just war.  But that is not a sin deserving to be killed in a massive ball of fire, sorry.  In combat, yes, US soldiers are a legitimate target, and legally speaking (from the point of view of the Geneva Conventions and the International Law of War), the targets Iran hit were 100% legitimate since international law does NOT ban collateral damage, it only bans INTENTIONAL collateral damage.  US military personnel are, by definition, legal, legitimate, targets, but on a human level I feel sorry for them and I don’t wish them to pay for the crimes of their commanders (for whom I have ZERO sympathy or compassion).

I am actually quite happy that nobody died in these strikes.

If there were numerous casualties (as some sources report), then I have no problem admitting that this strike was both legal and ethical, but I would feel sad for every killed person (US or Iraqi).

Do the Shia Muslims care about the lives of their enemies?  Yes! They actually do.  Proof?  Just see how Hezbollah treated those Lebanese people who were collaborators with the infamous Israel proxy called the “SLA” (South Lebanon Army) and you will see for yourself.  Have their been Shia executed atrocities in the past? Sure!  Starting in Iraq were various Shia militias committed plenty of horrible atrocities.  But that happens to ANY party to a vicious conflict, and ESPECIALLY a civil war (just look at the butchery the Russian or US civil wars were!).  But the fact is that Shia leaders often emphasize both mercy, compassion and justice (Hassan Nasrallah specifically said that Hezbollah would not target US civilians; contrast that with the Idiot-in-Chief).

This all depends on your criteria.

I think that this criteria makes it rather easy to score this latest strike, don’t you?

One more thing: two more rocket strikes seemed to have landed near the Green Zone.  From the (rather minimal) info I have, these were rockets from some kind of MRLS and they were fired by LOCAL Iraqi forces, NOT from Iran.  This is both interesting and telling.  Why?

Because you can expect a dramatic increase in these kind of “hit and run” mini attacks which can’t achieve a real tactical advantage, but which are devastating for morale and which hugely decrease the mobility and ability to operate of the targeted forces.  Again, I invite you to re-apply my criteria above to evaluate the usefulness (or lack thereof) of these strikes.

Singing off for a few hours.  Kind regards

PS: one more thing: the Idiot-in-Chief said that “Iran is standing down”.  Just remember that an other no less Idiot-in-Chief announced in 2006 that “Israel had defeated Hezbollah”.  This is an old US trick called “declare victory and leave”.  They have declared victory.  Good.  Now let’s see how long it will take them to get out of Iraq and the Syria and, much further down the road, from the entire Middle-East.