We usually start with some statistics but this week we will mention a few, and then move into two longer reads.

China added 55,000 new new-energy vehicle sector companies this year, for a total of 180,000 NEV startups. 52% are in wholesale and retail, 16% are in scientific research and technical services, and 10% in the leasing and business services.

The Power of Siberia pipeline is supplying 27 million cubic meters of gas daily to Beijing-Tianjin-Hebei. The northern arm was launched in 2019, and construction of the southern section, which started last July, will extend the route to Shanghai, and reach an annual capacity of 38 billion cubic meters when completed in 2025.

If America cannot make up its 1:20 talent gap with China, the latter’s march to world economic leadership is inevitable, since the table below transfers the performances of 2018’s 15-year-olds to all younger children. The US has fallen from #24 to #36 since PISA testing began. Now the top nations are on a level playing field, and those with higher cognitive competence will steadily pass those below. The USA outperformed China by a factor of 150 in 1994 but, by 2019, was behind the Middle Kingdom. 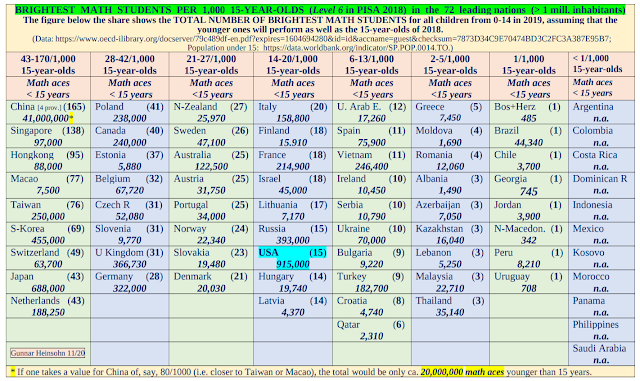 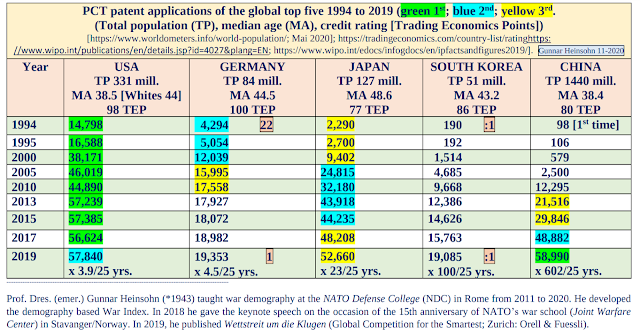 Over 1,000 Chinese researchers have left the US in addition to the 1,000 students and academics who had their visas revoked after they were deemed security risks.  Since Chinese researchers are the biggest foreign contributors to US science, their departure will push American science further down the league tables.

Chang’e 5 lifted off the moon with rock samples, to rendezvous with the orbiting module for return to Earth. This the first such mission by any country in more than 40 years and the latest in a series of increasingly ambitious pursuits, including a probe currently en route to Mars carrying a robot rover.  Read full article →

Beijing and Moscow are expanding their cooperation in space exploration and technologies. Premier Li Keqiang and his Russian counterpart Mikhail Mishustin announced a joint communique via their video conference on Wednesday, expressing their willingness to enhance cooperation in the research and development of vaccines and medicines to combat the Covid-19 pandemic.

Concerned over its negative reception by foreign businesses and governments, the State Council is discussing the future of the Social Credit System–since improving the business environment is one of its goals. The meeting indicated that future social credit regulations will: 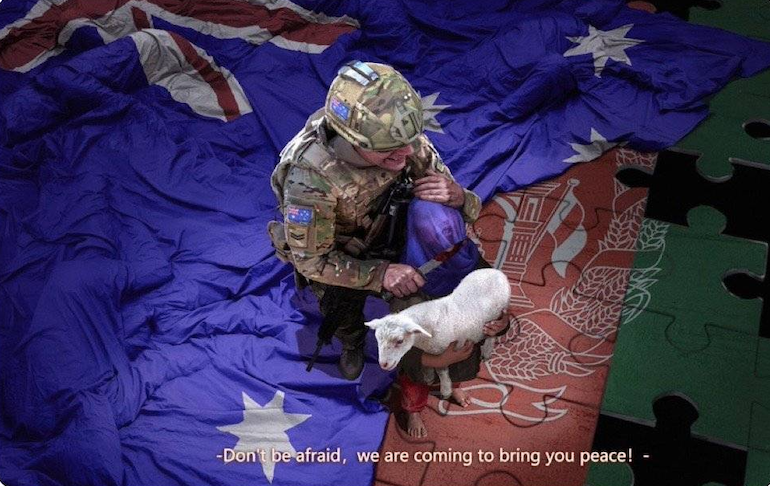 Why did Australia’s politicians and media deliberately antagonize their main trading partner, and why did Prime Minister Morrison opine that war with China ‘is a definite possibility’?

Hameed Ullah, from Kotwal village of Tarin Kowt, the capital of Uruzgan province, recalled those bad days in a video clip shared by Afghan journalist Bilal Sarwary. “Eight years ago, Australian troops raided our house at midnight and killed my father, Khalil Ullah, shooting him in the head.” “My father’s dead body was lying on the floor till morning, and the troops were there having their fun with laughter. The troops had pointed guns at us and were not letting us move. My father was a businessman, owning a car showroom on the main highway near the police battalion,” he noted.

Australian leaders and media have vilified, calumniated, and threatened the PRC since I was a lad, but their recent behavior was so egregious that China has indicted them for their worst offenses:

Between 2015-2020, China lowered tariffs on Australian products for six consecutive years. Ninety-five percent of the products we sell to China now enjoy zero tariffs. On Singles Day alone, 2,000 Australian businesses sold over US$720 million worth of goods to Chinese customers in 24 hours–yet the Australian government has been politicizing trade and investment issues, and constantly violating market principles by discriminating against Chinese companies.

Since 2018, it has rejected a dozen Chinese investment programs on the pretext of ‘national security concerns,’ rejections that led directly to large Chinese losses. Even more significantly, it banned Chinese companies from 5G network construction, citing spurious ‘national security’ threats. It initiated one-hundred six anti-dumping and anti-subsidy investigations of Chinese products, compared to four such Chinese cases on goods from Australia. China sees a pattern of bad-faith dealings, negative discrimination, and unprovoked hostility and, lest others emulate us, has chosen to air its grievances.

Neither government nor media has offered a reasoned defence, “The 14 items identified by the Chinese embassy document are seen by the Department of Foreign Affairs as key to Australia’s national interest and non-negotiable”. DFAT said the government makes “sound decisions in our national interest and in accordance with our values and open democratic processes”. The defence, in other words, rests–perhaps wisely, since the allegations are substantially correct.
So why did they do it?

Australia’s future appears bleak, since it has tied itself to the American chariot. President-elect Biden’s expected Defense Secretary Michele Flournoy says the US military needs “the capability to credibly threaten to sink all of China’s military vessels, submarines, and merchant ships in the South China Sea within 72 hours”. His choice for Secretary of State, Tony Blinken, plans to “coalesce skeptical international partners into a new competition with China”, and said he will “fully enforce the Hong Kong Human Rights and Democracy Act.” His choice for National Security Advisor, Jake Sullivan is a Peter Navarro-like China hawk who believes that signs are “unmistakable and ubiquitous that Beijing is gearing up to contest America’s global leadership”.

What is to be Done?

Since Australia has always been a willing satrap of foreign powers and its ‘parties’ are factions of the Great Capitalist Party in the Sky, there is little to choose between them. Australian business interests have been remarkably quiet, perhaps because most of them are mere branch managers of UK and US conglomerates.

Why are Pinduoduo, Meituan, Didi, Bytedance, Alibaba and Tencent all interested in this?

Please follow the rest of this writing about community buying here:

Lillian Li writes a longform analysis about tech in China from the perspective of a VC, sent out every other Wednesday or Thursday. You can find her at @lillianmli.

This represents but a fraction of what is included in the Here Comes China newsletter.  If you want to learn about the Chinese world, get Godfree’s newsletter here

Cover Photograph : A North China Leopard attacked sheep near Beijing, Hebei Province. Experts say that the leopards’ frequent appearances in areas where they were previously not thought to exist suggest that the long-expected “grand return” of the animal to Beijing, their original habitat, is possible. In recent years, they have been spotted frequently in the surrounding mountains around the capital.