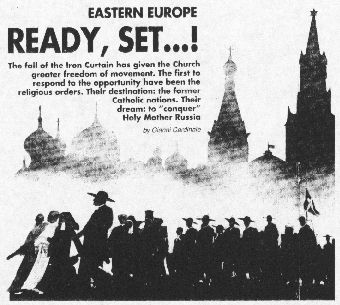 I regularly get questions about the so-called “Fatima apparitions” which have recently become popular again in Latin circles.  While the first time around the intention of this hoax was clearly to use the 1917 chaos in Russia to the benefit of the Papacy’s influence (you can read about this disgraceful episode here), the current re-activation of the hoax appears to aim to somehow piggyback the Latin Church unto the current religious revival of Russia, mostly by means of the deliberately so-called “consecration of Russia to the Immaculate Heart of Mary” by Pope Pius XII.  Needless to say, one cannot consecrate something one does not own, even to an internal organ of the All-Holy Theotokos, so that this “consecration” really proclaims is, as usual, the Vatican’s claim over the entire planet and, of course, Russia.  Frankly, I have neither the time nor interest to debunk this all, so what I have decided is simply to share with you two documents on this topic available on the Internet (one here, the other one here).  I hope that these two text will be helpful to debunk the hoax, dispel any misunderstandings and close any further discussions about stuff like the “consecration of Russia” or the “Third Secret”.