El Murid: To the Militia, Eventual Victory is a Statement of Fact 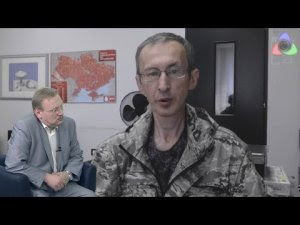 My status in Donetsk was entirely uncertain. Igor Ivanovich permitted me to be present virtually everywhere (with the exception of the places that were absolutely off bounds, and which I had no knowledge of in any event). Just in case, I was given a Paper that said pretty much the same thing – identity unknown, but assistance is compulsory.
All this enabled me to be really quite free in taking a look at everything within my reach. Mainly, it allowed me to speak freely with people of all ranks. And here my impression is entirely unequivocal – all these people are not simply certain of their victory, but also understand it in exactly the same way. All of them are sure that they will finish this war in Kiev. They say this without pathos and without slogans – they simply say it as a statement of fact. None of them have any doubts that this is how the war will end.
With respect to Russia, the opinions I encountered varied widely. If we were to generalize – they continue to hope for Russia’s aid, but no longer expect it. With respect to Crimea, the opinion of the vast majority was also quite solidary – all of them tend to think that Russia’s key mistake was that after Crimea it chose not to march on Kiev and did not close this matter once and for all when the Junta was still extremely weak. 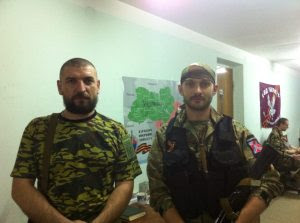 At the same time, the image of the “Vatniks”, so cherished by the Maidan propaganda, on closer inspection turned out to be a myth. In the Militia there is a multitude of people with higher education. And these are not managers-lawyers, but techies and practicians. Strelkov’s aide is a math teacher; the favourite past time of his personal guard is not cards, but chess, and, in my amateur opinion, at a fairly high level. Although officers and commanders visually appear quite unpresentable, which is not surprising, given their daily field activities, their sound judgment and fairly decent knowledge of a multitude subjects would put to shame any Moscow or Kiev kreakl [Note: a Russianized portmanteau of the words “creative” and “class”, used primarily in a sarcastic manner].
In contrast to those who painstakingly create an image of the Militia as gangs of some kind of Vlasovtsy, the people that encountered spoke little of politics. Their personal views and preferences are hidden and subordinated to the main goal – winning this war. To them, all the rest is at this time absolutely irrelevant. 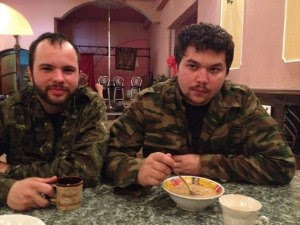 Strelkov has introduced awards and ranks – and he distributes them rather sparingly. Only the really heroic feats get recognized. At the same time, these awards have yet to find many of the heroes. It was literally during my trip to the border that my escort made attempts to call Donetsk and asked urgently to award a fighter that, over the course of three months of fighting, shot down 4 (four) enemy aircraft. As I understood, this was two helicopters, a drone and an airplane. For all of this he was given an award of a thousand hryvnia. My escort urged that the callsign of the fighter be recorded, so that he could be awarded the Cross of St. George.
In general, as it always happens in a Russian army, the shortages of everything are fully compensated for with regular everyday heroism. Commanders take care of their men, and any wounded becomes the concern of all. I cannot say that I saw everything, but here I am talking about my personal impressions.
I was also able to have a discussion with a Ukrainian serviceman. He was, in fact, Ukrainian military – a captain of the Ukrainian armed forces. I cannot say that he is a fanatical Banderovets, but he is absolutely sure that he is fighting Russia. He is not at all thrilled with the Kiev authorities, and he does not hide his attitude toward them, but he will obey his orders to the end. Perhaps this is an isolated fact, unsuitable for making far-reaching conclusions, but I had no other interaction with the Ukrainian military. 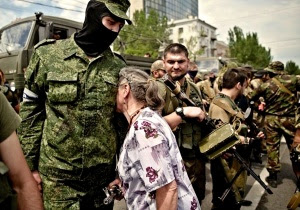 As for the common people, I can only say that they have gotten used to the war. Same as with every cataclysm. We stopped over in Torez and spoke to a local grandma who was carrying something to her daughter and grandson. She hates Kiev with all her heart. She hates the war and the Banderovtsy too. Considering that even in peacetime Torez looks like a ghost town, her fatalism is to some extent understandable. The war made the lives of these people dangerous, but their lives were hopeless even without war.
The militiamen at the checkpoint in Snezhnoye are by and large adults and serious men. Their hatred of Kiev and its butchers is almost palpable. The fact that they have taken up arms shows that they finally could not take it anymore. Almost every one of them has a grenade on the ready, which they consider to be their final argument. They entertain no possibility of surrender. There are also young woman and guys, but I think even they understand that this no longer is a play fight. 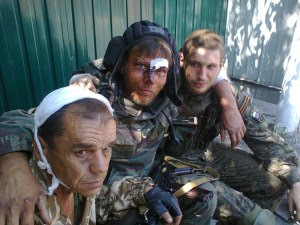 On one of the trips around the city and to the suburbs – in the direction of Maryinka – I was taken by a person who reads me and who volunteered his help. He is preparing to join the ranks of the Militia as soon as he puts his current affairs in order. He is not in good health, but he is ready to do any work that he is capable of.
There were also others who were more careful. More neutral, and sometimes even hostile to the DPR. They did not pour out their soul to me, but it was evident that they clearly did not support the new authorities. Nevertheless, I cannot say that I met many of them. Most live strictly in accordance with the famous song by Chaif, “Oy-yo” – On the TV they tell me how to live. I’ve had enough! It can’t be worse that it was before! – that is their main theme. Though it may well be that they are wrong.