I am NOT Charlie

Okay, let’s be clear.  I am not Muslim.  I oppose terrorism.  I don’t even support the death penalty.  I loathe Takfirism.  I oppose violence as a means to make a political or ethical point.  I fully support freedom of speech, including critical speech and humor.

But this morning I am most definitely NOT Charlie.

In fact, I am disgusted and nauseated by the sick display of collective hypocrisy about the murders in France.  Here is why:

Charlie Hebdo for the Darwin Awards

The folks at Charlie Hebdo had it coming. Here is what I wrote about them in September 2012 when they published their famous caricatures of the Prophet Mohammed: Worthy of the Darwin Awards, if you ask me.  Excellent, the “gene pool” of the French “caviar-Left” badly needs some cleaning“.  Today I fully stand by my words. 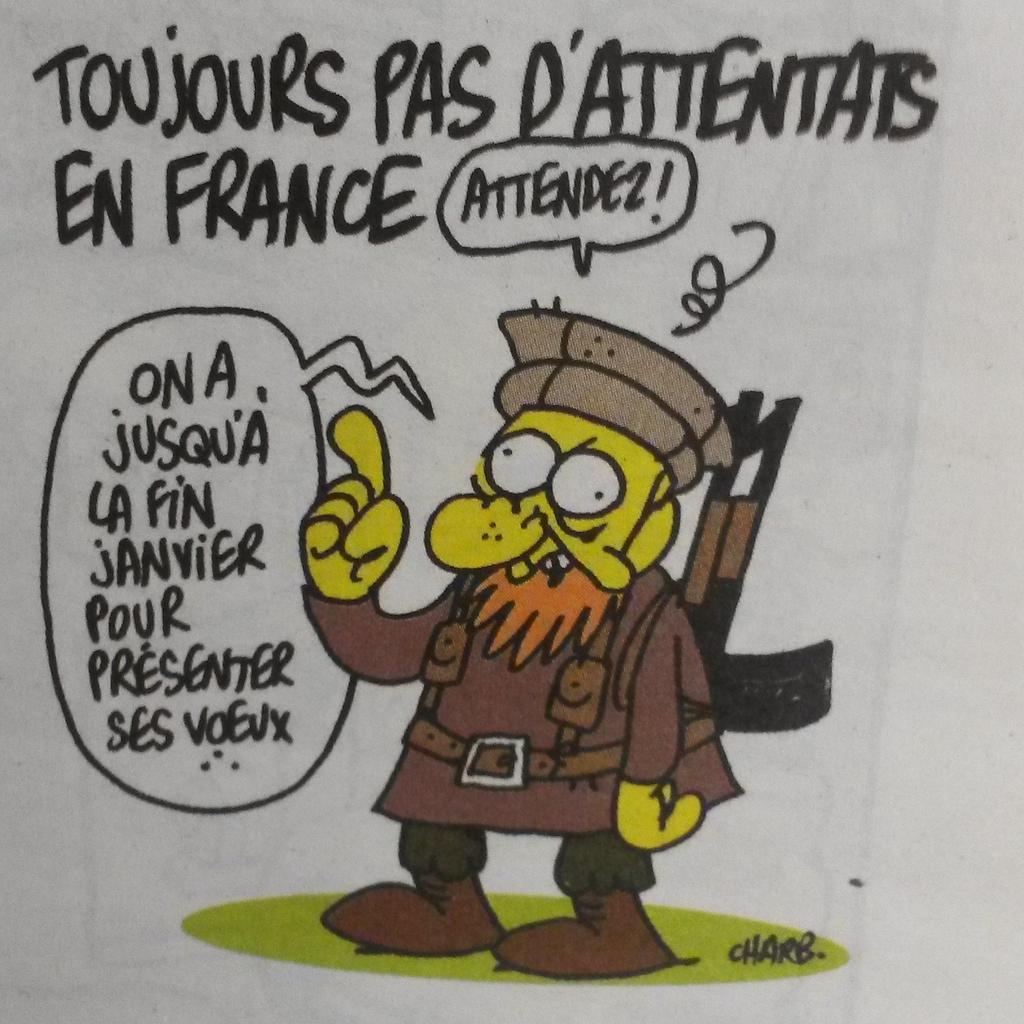 Let me ask you this: what would be the point of, say, taking a nap on train tracks?  You don’t have to “agree” with the train which will run you over, but it still will, won’t it?  What about taking a nap on train tracks specifically to make a point?  To prove that the train is bad?  To dare it?  To make fun of it?  Would that not be the height of stupidity?  And yet, that is *exactly* what Charlie Hebdo did.  I would even argue that that his how Charlie Hebdo made it’s money, daring the “Muslim train” to run them over.  You think I am exaggerating?  Check out the caricature which one of the folks who got murdered yesterday had just posted.  The text reads: “Still no terrorist attacks in France – Wait, we have until the end of January to send you are best wishes“.  The crazy person shown in the drawing is packing a Kalashnikov and wearing an Afghan “Pakol” – the typical “crazy Muslim” in Charlie Hebdo’s world.  Talk about a stupid dare…

There is an expression in Russian: spitting in somebody’s soul.  It fully applies here.  Muslims worldwide have be unambiguously clear about that.  They take blasphemy very, very seriously, as they do the name of the Prophet and the Quran.  If you want to really offend a Muslim, ridicule his Prophet or his Holy Book.  That is not a secret at all.  And when Charlie Hebdo published their caricatures of the Prophet and when they ridiculed him the a deliberately rude and provocative manner, they knew what they were doing: they were very deliberately deeply offending 1.6 billion Muslims world wide.  Oh, and did I mention that in Islam blasphemy is a crime punishable by death?  Well, it turns out that of 1.6 billion Muslims exactly three decided to take justice in their own hands and kill the very deliberately blaspheming Frenchmen.    You don’t have to be Muslim or to approve of the death penalty for blasphemy to realize that this was inevitable and that this has nothing to do with Islam as a religion.  Offend any group as large as 1.6 billion and sooner or later you will find 1-5 folks willing to use violence to make you pay for it.   This is a statistical inevitability.

Are some victims more equal then others?

So 12 deliberately “soul spitting blasphemers” were murdered and all of France is in deep mourning.  The media worldwide does such a good job presenting it all as a planetary disaster that many thousands people worldwide say “I am Charlie”, sob, light candles and take a “courageous” stance for freedom of speech.

Crocodile tears if you ask me.

The fact is that the AngloZionists have carefully and lovingly nurtured, organized, armed, financed, trained, equipped and even directed the Takfiri crazies for decades.  From the war in Afghanistan to Syria today these murderous psychopaths have been the foot-soldiers of the AngloZionist Empire for decades.  But, apparently, nobody cares about their victims in Afghanistan, in Bosnia, in Chechnia, in Kosovo, in Libya, in Kurdistan, in Iraq or elsewhere.  There these liver-eating murderers are “freedom fighters” who get full support.  Including from the very same media which today is in mourning over Charlie Hebdo.  Apparently, in the western ethos some victims are more equal then others.

And when is the last time somebody in Europe shed a single tear over the daily murders of innocent people in the Donbass whose murder is paid for and directly directed by the western regimes?

How stupid do they think we are?

And then this.  Even a drooling idiot knew that Charlie Hebdo was THE prime target for that kind of attack.  And I promise you that French cops are not drooling idiots.  Yet, for some reason, they were nowhere to be seen that day.  Only a van with two (or one?) cop was parked nearby (hardly an anti-terrorist protection detail) and one poor cop was shot and then executed with an AK shot to the head while he was begging for mercy.  Is this the best the French state can do?

So what is going on here?  I will tell you what – the EU 1%ers are now capitalizing on these murders to crack down on their own population.  Sarkozy already met Hollande and they both agreed that new levels of firmness and vigilance need to be implemented.  Does that not reek of a French 9/11?

So no, I am most definitely NOT Charlie this morning and I am disgusted beyond words with the obscene display of doubleplusgoodthinking “solidarity” for a group of “caviar-lefties” who made their money spitting in the souls of billions of people and then dared them to do something about it.  And I am under no illusion whatsoever about the fact that cui bono clearly indicates that the French regime either organized it all, or let it happen or, at the very least, makes maximal political use of it all.

But most of all, I am disgusted with all those who play along and studiously avoid asking the right questions about all this.  I guess they really are “Charlies” all of them.