Israel SITREP: The Christ-hating Israelis are at it again

or, for that matter, this:

Well, our Israeli friends have done it again, check out this article by RT: (just ignore all the explaining away and other cop-outs in the text of the RT article).
———- 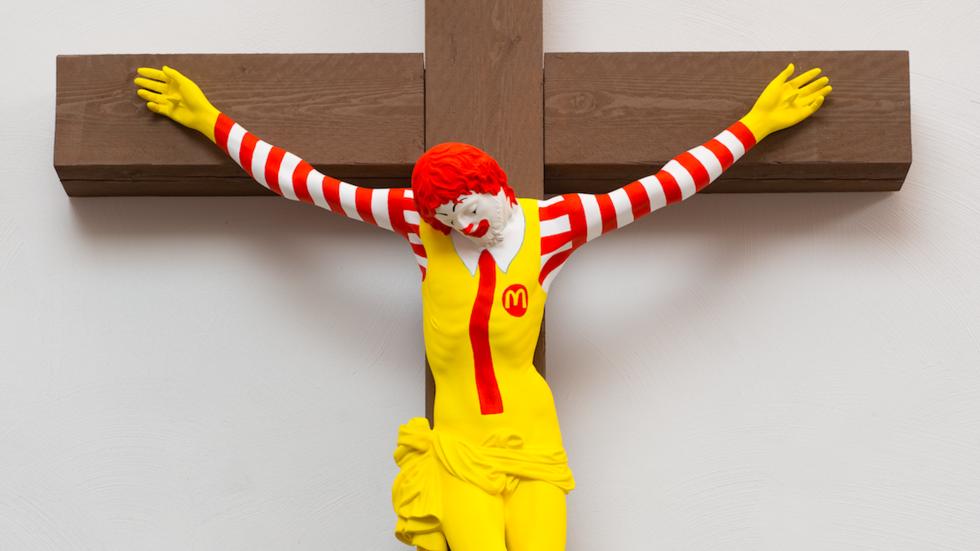 An art exhibit featuring a crucified Ronald McDonald caused chaos in the Israeli city of Haifa last week, after members of the country’s Arab Christian minority took offence at the depiction and protested outside the museum.Hundreds of Christian protesters called for the statue, titled ‘McJesus,’ to be removed from the museum, with Israeli police saying that some rioters even hurled a firebomb at the building and threw stones, shattering windows and injuring officers. Crowds were eventually dispersed with tear gas and stun grenades, according to the Associated Press.

Christian Palestinians protesting in front of the Haifa Museum to the sculpture “McJesus” by Finnish artist Jani Leinonen, depicting Ronald McDonalds clown on the cross. pic.twitter.com/7mZH0nq7Nz

However, it seems the protesters missed the point of the exhibit, which was not intended to be an attack on Christianity, but instead meant as an artist’s statement on capitalism, corporate domination and how modern society and culture worship false gods. The exhibit also includes Barbie-doll boxes with Jesus and the Virgin Mary inside.

The sudden focus on the exhibit came as a surprise to Museum Director Nissim Tal, however, since the art in question had been on display for months already without issue. It is believed that photos of the controversial statue recently published on social media prompted the protests.

The work has also been shown in other countries without problems, although Israel’s Christians make up a tiny percentage of the population in a country which is already rife with ethnic and religious tensions.

Wadie Abu Nassar, an adviser to church leaders who have demanded the exhibit’s removal, told the AP it was necessary to understand that freedom of expression “is interpreted in different ways” in different societies. “If this work was directed against non-Christians, the world would be turned upside down,” he said.

The museum has refused to remove the artwork, saying that it must uphold freedom of expression and resist pressure. “If we take the art down, the next day we’ll have politicians demanding we take other things down and we’ll end up only with colorful pictures of flowers in the museum,” Tal said, adding: “We will be defending freedom of speech, freedom of art, and freedom of culture, and will not take it down.”

Israeli Culture Minister Miri Regev, who has earlier been accused of supporting censorship after pushing legislation commanding national “loyalty” in art, also called for the exhibit to be taken down, saying it was “disrespectful.”

The museum has hung a curtain over the entrance to the exhibit and put up a sign saying that it is not intended to offend, but that is the “maximum” it will do, its director added. Protesters, however, have refused to give up, with one reportedly camping outside the museum in a tent with a sign calling on artists to “respect religions.”

In another twist, the Finnish artist who produced the ‘McJesus’ statue, Jani Leinonen, also wants the work taken out of the Haifa museum, but not because he doesn’t want to offend. Leinonen said he supports the Boycott, Divestment, Sanctions (BDS) movement, which aims to pressure Israel to change its policies toward Palestinians.

The McJesus Saga keeps getting better and better. Apparently Finnish artist Jani Leinonen is a #BDS activist/supporter and wants his work taken out of the Haifa museum. He wasn’t aware it was being exhibited there. 😂 pic.twitter.com/WWiClhqh8L

———-
Bottom line is this: if it is anti-Christian, then even a BDS-supporting goy will get his 15 minutes of fame in the “only democracy in the Middle-East”.

These guys, and the al-Qaeda crazies, are the forces which the West chose to support in the Middle-East.