6804 Views April 16, 2019 5 Comments Watch List The Saker
Thanks to “R” for pointing out this Wikipedia entry to me.  The Saker
From Wikipedia: https://en.wikipedia.org/wiki/List_of_monuments_damaged_by_conflict_in_the_Middle_East_during_the_21st_century
This is a list of monuments suffering damage from conflict in the Middle East during the 21st century. It is sorted by country.

On January 24th, 2014 a car bomb attack targeting the Cairo police headquarters on the other side of the street caused considerable damage to the museum and destroyed many artifacts. It is estimated that 20-30% of the artifacts will need restoration. The blast also severely damaged the buildings facade, wiping out intricate designs in the Islamic style. The Egyptian National Library and Archives in the same building was also affected.[2][3][4]

In May 2011, a number of objects excavated from Cyrene in 1917 and held in the vault of the National Commercial Bank in Benghazi were stolen. Looters tunnelled into the vault and broke into two safes that held the artefacts which were part of the so-called ‘Benghazi Treasure’ . The whereabouts of these objects are currently unknown.[6]

Parts of the UNESCO World Heritage site of Cyrene were destroyed in August 2013 by locals to make way for homes and shops. Approximately 200 vaults and tombs were leveled, as well as a section of a viaduct dating to the third century BC. Artifacts were thrown into a nearby river.[7] 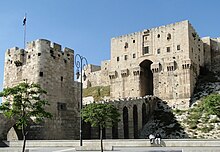 The fortified entrance of the Citadel of Aleppo

In August 2012, during the Battle of Aleppo of the Syrian civil war, the external gate of the citadel was damaged after being shelled during a clash between the Free Syrian Army and the Syrian Army to gain control over the citadel.[12]

During the conflict, the Syrian Army used the Citadel as a military base, with the walls acting as cover while shelling surrounding areas and ancient arrow slits in walls being used by snipers to target rebels.[13][14] As a result of this contemporary usage, the Citadel has received significant damage.

The Khalid ibn al-Walid Mosque has been a symbol of anti-government rebels during the Syrian civil war.[17] According to The New York Times, Syrian security forces killed 10 protesters participating in a funeral procession as they were leaving the mosque on 18 July 2011.[18] The mosque, which the Syrian government stated had been turned by the rebels into an “arms and ammunition depot”, was abandoned by the rebels on 27 July 2013.[19] Shelling by government forces damaged Khalid’s tomb inside the mosque. Following its capture by the Syrian Army, state media showed heavy damage inside the mosque, including some parts of it being burned, and the door to the tomb destroyed.[17]

During the Syrian Civil War which began in 2011 UNESCO voiced concerns that the conflict might lead to the damage of important cultural sites such as Krak des Chevaliers.[20] It has been reported that the castle was shelled in August 2012 by the Syrian Arab Army, and the Crusader chapel has been damaged.[21] The castle was reported to have been damaged in July 2013 by an airstrike during the Siege of Homs,[22] and once more on the 18th of August 2013 it was clearly damaged yet the amount of destruction is unknown. The Syrian Arab Army recaptured the castle and the village of al-Hosn from rebel forces during the Battle of Hosn on March 20, 2014, although the extent of damage from earlier mortar hits remained unclear.[23]

Monumental arch in the eastern section of Palmyra’s colonnade

Main shrine of the Temple of Bel

As a result of the Syrian Civil War, Palmyra experienced widespread looting and damage by combatants.[24] During the summer of 2012, concerns about looting in the museum and the site increased when an amateur video of Syrian soldiers carrying funerary stones was posted.[25] However, according to France 24‘s report, “From the information gathered, it is impossible to determine whether pillaging was taking place.”[25] The following year the facade of the temple of Bel sustained a large hole from mortar fire, and colonnade columns have been damaged by shrapnel.[24] According to Maamoun Abdulkarim, director of antiquities and museums at the Syrian Ministry of Culture, the Syrian Army positioned its troops in some archaeological-site areas,[24] while Syrian opposition soldiers stationed themselves in gardens around the city.[24]

On 13 May 2015, the ISIL launched an attack on the modern town, sparking fears that the iconoclastic group would destroy the site.[26] On 21 May, ISIL forces entered the World Heritage Site.[27] According to eyewitnesses, on 23 May the militants destroyed the lion of Al-lāt and other statues.[28] Local residents reported that the Syrian air force bombed the site on 13 June, damaging the northern wall next to the Temple of Baalshamin.[29] The Temple of Baalshamin and the Temple of Bel were demolished by ISIL in August 2015.[30] 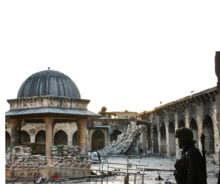 Mosque in 2013, after destruction of the minaret

On 13 October 2012 the mosque was seriously damaged during clashes between the armed groups of the Free Syrian Army and the Syrian Army forces. President Bashar al-Assad issued a presidential decree to form a committee to repair the mosque by the end of 2013.[31]

The mosque was seized by rebel forces in early 2013, and, as of April 2013, is within an area of heavy fighting, with government force stationed 200 meters (660 ft) away.

On 24 April 2013 the minaret of the mosque was reduced to rubble during an exchange of heavy weapons fire between government forces and rebels during the ongoing Syrian civil war. The Syrian Arab News Agency (SANA) reported that members of Jabhat al-Nusra detonated explosives inside the minaret, while opposition activists said that the minaret was destroyed by Syrian Army tank fire as part of an offensive.[32] Countering assertions by the state media of Jabhat al-Nusra’s involvement, opposition sources described them as rebels from the Tawhid Brigades who were fighting government forces around the mosque.[33] The opposition’s main political bloc, the Syrian National Coalition (SNC), condemned the minaret’s destruction, calling it “an indelible disgrace” and “a crime against human civilization.”[33]

Holy Nativity according to the Flesh of our Lord, God and Saviour Jesus Christ January 7th

Click on the icon for an explanation of the feast of Holy Nativity according to the Flesh of our Lord, God and Saviour Jesus Christ